Posted on December 18, 2012 by diannehartsock 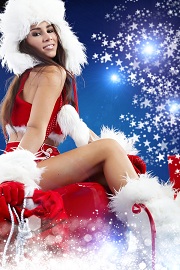 Let’s have some fun!

Since this is a hop for Tantalizing Tuesdays, I came up with a tease for you with a little prize for desert. Enjoy!

(pics by photobucket and bigstock)

“You okay?” Charlie bent over the elderly man who’d slipped on the ice.

Charlie noticed his bare hands and dug in a pocket for gloves. “It’s freezing out. Here, put these on.” He glanced along the sidewalk, deserted Christmas Eve. “Are you alone? It’s not safe.”

“My friends are around the corner.” The stranger touched Charlie’s face, his smile dazzling. “Merry Christmas, Charlie.”

Charlie watched him amble off, then continued to his apartment. Once inside, he put on an old movie for company. Couldn’t be helped that Ken had walked out two months ago, taking Charlie’s joy with him.

He fought his loneliness, but the hurt seeped out anyway. “Why did you go?”

Charlie stared at the apparition in front of the couch. He should be terrified, but instead warmth spread through his body. He knew this man, had dreamed of him.

“Are you the ghost of Christmas present?”

The man knelt in front of Charlie. “I’m an elf. Stefan. Kris said you wished for me.”

“The man you helped earlier.” Stefan ran his hands up Charlie’s thighs. “You want me, don’t you? I’ve wished for you for years.”

Charlie moaned as Stefan brushed fingers over his cock. “You’d stay with me?”

Charlie thought of his lonely life. There was nothing for him, and Stefan was his dream…

“Merry Christmas, baby,” the elf murmured and pulled him into his arms.

Prize Time! Leave a comment telling me your favorite holiday story for a chance to win a PDF copy of any book on my backlist. Don’t forget to leave your contact info!

Also! I have a free read DAMON’S TOUCH with Breathless Press if you’d like to take home a copy for yourself. Merry Christmas!!

I’ll leave you with a little excerpt from my new holiday story MERRY CHRISTMAS SHELTON available at Breathless Press!

Can Shelton and Nevil overcome the obstacles of a blizzard, a baby, and one hot redhead and find their way to a merry Christmas?

“Hush. Here, bite on these.” Nevil put the dark beads against Shelton’s lips until he opened his mouth and licked along their length. Nevil caught his breath and rolled off him, stretching out on the rug. “Wider?” he asked and slid the smaller end of the link between his lips. Shelton sucked in a few more of the smooth plastic balls and Nevil moved them gently in and out of his mouth, looking mesmerized. “Good lord,” he whispered shakily.

Nevil removed the beads and kissed him, a deep sensual meeting of lips and tongues that sparked desire through Shelton to the tips of his toes and back up to his prick straining against his jeans. His lover shoved up Shelton’s shirt and rubbed his nipples between thumb and fingers, pinching lightly. He lowered his head and bit and licked at them until Shelton tossed his head at the ripples of pleasure.

“Nevil…”He whimpered for more and Nevil slid his hands down his chest and stomach, his skillful tongue following. Shelton panted as his lover undid the buttons on his jeans one at a time. Warm lips clamped on the head of his dick and he cried out as Nevil’s tongue darted into the slit, making him crazy with need. He pushed into his darling’s mouth but Nevil drew away and sat back on his heels. Standing suddenly, his lover stripped out of his clothes, his thick cock bouncing against his flat stomach as he slid off of his pants.

Nevil quickly retrieved the lube from the coffee table drawer, then knelt beside him and picked up the beads. There was a gleam in his eyes as they raked over Shelton that made him tremble. “You know, sweetheart, I think you’re too sweet to watch this,” Nevil told him and lifted his shirt over his arms, covering his head and plunging him into darkness.

Shelton choked on a laugh, which turned into a gasp when Nevil bit his right nipple then soothed it with his tongue. His jeans were tugged and he squirmed out of them as his lover pulled them down.

Shelton pulled his feet up and Nevil nudged his legs wide apart. Shelton waited, straining to hear any sound from his darling to let him know what to expect. A warm tongue licked his dick, he jumped, and his bones melted at Nevil’s wicked chuckle. Oh God! His lover was capable of anything in this mood.

He heard the squirt of lube and moaned as a slick finger massaged the sensitive skin of his hole. Pressure, and then a fat thumb nudged inside him. He winced at the quick pain, but that disappeared as Nevil slid in further and stroked the walls of his hole, moving in circles to stretch him further.

Nevil removed his thumb. Here it comes. A finger slid in coupled with the first of the rounded beads. Shelton grunted. They didn’t hurt, but felt foreign, different, naughty. His lover used his finger to loosen him further and Shelton groaned as a larger bead eased inside his slick hole. He stifled a cry as two more quickly followed, each striking his prostate as it passed over.

Nevil pulled out his finger and Shelton choked, a deep moan rising from his chest as the last, largest beads were pushed relentlessly in, stretching and filling him. So good. Nothing like the heat and life of Nevil’s cock, but then his lover began to make quick little thrusts back and forth with the beads and his head swam with pleasure.

Stretching across Shelton’s body, Nevil pulled his shirt from his face. He sighed as cool air dried the sweat on his forehead.

“Shit,” he moaned, and it took a second to catch his breath.