Hop Against Homophobia and Transphobia

We’re here to spread awareness of homophobia and transphobia, and to stand together as a writer community against discrimina

I’d like to talk a little today about Bullying, especially in the LGBTQ community. It breaks my heart to think that not only do the victims of bullying have to face the cruelty and ridicule of the rest of the world, but that they are also shunned and discarded by members of a community where they should find nothing but acceptance and understanding. We need to do better, people!

If you still suffer the scars of bullying, or are being bullied today, I found a terrific site where people come together, share their experiences, and maybe find a little peace.

The mission of the You Will Rise Project is to provide a multimedia showcase for
people of all ages who have been bullied to share their stories through the
arts. Submissions can include visual art (paintings, drawings, sculptures,
videos, etc.) as well as poetry, song lyrics, short stories, or other creative
expressions that best capture their personal experiences.
By
giving visitors the opportunity to view these creative works, we hope to
educate, instill pride, generate positive feedback, and provide online resources
– all for the purposes of supporting, inspiring creative productivity, fostering
respect for cultural and sexual diversity, and improving the quality of life for
those who have been or are currently being bullied.

I awoke in my lover’s arms. Sweet kiss deepening into passion. And as we joined I forgot if it was a man or woman I held. Only that our souls came together in the glorious celebration of life.   -Me

Thank you so much for participating in our hop! Please comment below for a chance to win a $10 ARe Books gift card. Don’t forget your contact info!

Also, as a thank you,  please feel free to pick up your copy of DAMON’S TOUCH HERE if you’re interested. It’s free!!

Damon’s hunger gnaws at him. He needs to feed soon before desire overrides caution and he enters the village.

For Lacey, the sight of Damon drinking from his brother’s throat should repulse him. Instead, he’s oddly aroused. Damon is all his fantasies come true. Lovely and dangerous.

As Damon’s prisoner, Lacey’s love for his beautiful captor grows, but will love be enough to set them both free?

Lacey stumbled back as a figure detached from the door where he’d leaned unnoticed. Lacey’s blood raced as his body responded to the unique beauty of the face and form of the man.

Heat flushed his skin as his sudden erection pushed against the thin material of the sleeping garment he wore, blatant, aching to be touched.

The lovely vision stopped before him and eyes dark as coals looked him over. The tip of a pink tongue licked full lips as the man’s gaze lingered on the unmistakable bulge at his groin and then slid upwards. Lacey forced his body to stillness as the man’s slim fingers undid the laces of his tunic and exposed his chest.

Lacey swooned as the melodic tones of the man’s voice wound through his head. “Who are you?” he asked, desperate for some hold on reality. His mind screamed in warning, but his body reacted as if they’d been long time lovers. He ached for the stranger’s touch. He wanted those luscious lips on his body. Oh God.

His gaze lowered to the floor and he saw the shackles tying him to Caleb’s bed. “Are we prisoners?’

A finger under his chin brought his head up and he met the hot desire in the man’s dark eyes. “Only until I’m sure of you, my love,” the man murmured and touched their lips together. “I’m Damon.”

Shock ran through Lacey, swift hunger. Damon slid his hands inside his tunic and Lacey moaned as his nipples were fondled, pinched. He hadn’t known the pricks of pleasure that could give him. Fear slammed into him when Damon’s hands slid over his ass and under the garment, to come around and caress his balls.

He pulled away and Damon lifted his hands. “You don’t desire my touch, Lacey?”

Lacey’s thoughts were a sea of confusion and lust. He should be repelled and outraged by the man. Instead he stood captivated and wanting. Shame burned him and he had no answer.

With a hiss and sudden movement, Damon climbed on the bed and straddled Caleb’s prone body. Lacey watched with jealous eyes as Damon caressed Caleb’s breast and threaded his fingers in the golden hair spread on the pillows. He kissed each closed lid and touched their lips together. Passionate kisses trailed across his cheek then Damon buried his face against Caleb’s neck. Realization broke Lacey from his spell. “No! Oh, please…”

Helpless tears stung his eyes and he held out pleading hands as Damon continued to suck at his brother’s throat. “Please, Damon. I’ll do anything…”

Damon lifted his head and Lacey’s drew a harsh breath. The man’s eyes gleamed, wide and wanton. Blood stained his lips. He was the most beautiful creature Lacey had ever seen. Uttering a low growl, Damon crawled across Caleb’s still form and took Lacey’s mouth in a brutal kiss. Without pause, he climbed from the bed and pushed Lacey down on the soft furs and twined their bodies. He kissed and touched and sucked Lacey everywhere until he became tangled in the passionate dance.

Damon drew back and left him bereft as he stripped out of his clothing. Lacey uttered a low cry of need as Damon’s thick cock jutted free. He started to his knees but Damon had other plans. He placed the flat of his hand on Lacey’s chest to hold him down while he reached for a bottle on the bookshelf above them. 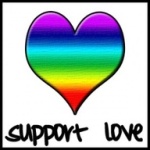 Author of paranormal/suspense, fantasy/adventure, m/m romance and anything else that comes to mind. Oh, and a floral designer.
View all posts by diannehartsock →
This entry was posted in Uncategorized and tagged blog hop, Gay Lesbian and Bisexual, Homophobia, International Day Against Homophobia & Transphobia, LGBT, prizes, Transphobia. Bookmark the permalink.

28 Responses to Hop Against Homophobia and Transphobia