Posted on October 23, 2013 by diannehartsock

Welcome to my Hump Day Hook! This is a weekly blog hop where you post ONE paragraph from a WIP or a published work and post it on your blog. You can find other delicious hooks HERE.

The shower turned off, and Matt rose quickly from the couch. The least he could do was offer the man something to wear. Hurrying down the hallway, he was startled when the bathroom door opened and Jesse almost stepped into him.

“Oh, sorry.” Jesse blinked, flustered, sexy as hell with the towel clutched at his waist. The rope of black hair he usually kept tied off his neck hung in soft ringlets to his shoulders. The dark, liquid eyes in his fine-boned face must have come from his Haitian mother; they were wide, vulnerable. The dawning interest as they swept Matt’s body caught him on fire. 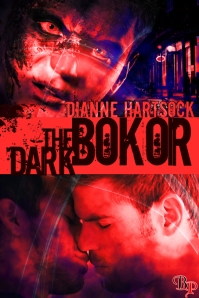 It’s started. Bodies have been found in the French Quarter, torn limb from limb. The undead have been seen walking. For Detective Matthew Rieves, this is the worst news he can imagine. Having spent his entire life in Orleans Parish, Matt’s no stranger to the bizarre. Though, despite the growing evidence, he still has a hard time believing in the occult. But when two hoodoo bokors vie for supremacy, it’s the innocent civilians that pay the price.

For Jesse Dalembert, he’d left New Orleans to sever his ties with hoodoo. But when a friend is brutally murdered by the bokor’s zombies, he returns, falling at once into danger and into Detective Rieves’s bed. With their lives on the line, their simmering attraction flares into a passion they can no longer deny.

Working against time, can the lovers find a way to stop the hoodoo war, or will they fall victim to the dark magic, maybe becoming zombies themselves?

Author of paranormal/suspense, fantasy/adventure, m/m romance and anything else that comes to mind. Oh, and a floral designer.
View all posts by diannehartsock →
This entry was posted in #humpdayhook, book quotes and tagged #newbook #mmromance #thriller #breathlesspress, Halloween, Hump Day Hook. Bookmark the permalink.