Posted on October 29, 2013 by diannehartsock 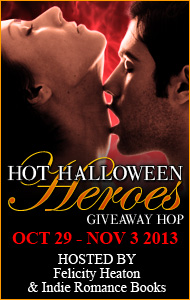 Halloween is the perfect time to celebrate our favorite hot paranormal romance heroes and share them with others!

This hop is run by Felicity Heaton and Indie Romance Books

Hero (mythical priestess), in Greek mythology, priestess of Aphrodite, goddess of love, at Sestos, a town on the Hellespont (now Dardanelles). Hero was loved by Leander, a youth who lived at Abydos, a town on the Asian side of the channel. They could not marry because Hero was bound by a vow of chastity, and so every night Leander swam from Asia to Europe, guided by a lamp in Hero’s tower. One stormy night a high wind extinguished the beacon, and Leander was drowned. His body was washed ashore beneath Hero’s tower; in her grief, she threw herself into the sea.

After this, I wanted to bring Adrian from stone into living flesh. This is a hard feat to accomplish! How to make a fanciful creature not only become real to a reader but also believable. I really wanted to keep away from the flash and glitter of movies. So I had it happen without magic at all, but by a ‘gift’ all Watchers possess, part of their nature. And to breathe life into this gargoyle I decided to make him as flawed as the rest of us with his own insecurities and strengths, joys and heartbreaks. A person we can relate to. My story, Philip’s Watcher’ is about two young men caught up in a war neither is prepared for but find the strength to succeed in each other.

My hero Taden in NATHANIEL is a different type of hero. Taden has met his dream man, the enchanting Nathaniel, who wields powers far beyond anything he’s seen before. Taden’s life has left him ill-prepared for the wonder that is Nathaniel. He’s a titled landowner, master of the family home and lands, and although he hasn’t seen war in his lifetime, uneasiness is growing between his country and the Sutherlin’s pushing at their border. He’s heard of magic users, but they belong to the far past when the witches had been driven from his continent.

And there was Nathaniel, beautiful and ethereal and broken, needing his aide. What was a man to do? Taden not only must go against everything he’s believed in, but also stand with Nathaniel against his own people to keep him safe.

As you can see, the hero of ‘Nathaniel’ is not the all-powerful magic user, but the courageous, honorable man who loves him. Taden risks everything, even his life, to keep Nathaniel safe.

In PHILIP’S WATCHER and NATHANIEL, my two heroes give everything they have for the men they love. What more can anyone want in a hero?

Prize Time! Comment below for a chance to win an e-copy of either NATHANIEL or PHILIP’S WATCHER. Don’t forget to leave your contact info!

Also, you can continue the hop Powered by Linky Tools. Click here to view this Linky Tools list…

Can passion melt a heart of stone?

Darkness is spreading in the world with only the powerful Agenor family to oppose it. In the guise of a stone gargoyle atop the castle walls, Adrian has protected Philip, the young heir, since birth, watching him grow from childhood into a strong but lonely man without love.

When the clan chief, Philip’s father, is murdered by those he trusted, Adrian resumes his human form to better protect his beloved Philip. And finds his love returned. As lovers, their passion is all-consuming, but as they fight against treachery from within, will their love be enough to stem the dark tide sweeping the land? And will it be enough to keep Adrian’s heart alive…

From the moment Taden rescues Nathaniel from the Sutherlin soldiers’ torture, he finds himself caught in the gaze of the most beautiful eyes he’s ever seen; amazing eyes that hold him thrilled and confused. The Sutherlins are planning to invade the beautiful Tahon Valley, but as Taden secrets Nathaniel from their reach, he finds himself drawn to the young man. Not only does he feel the urge to protect him, but he feels an ache he hasn’t felt in many long years.

Nathaniel claims to be a traveler from a distant continent, saying he comes in peace. True or not, the youth has powers beyond anything Taden has seen—control over men and animals and the very weather. Taden falls hard for the strange traveler, protecting him not only from the Sutherlins but from his own mistrustful people, who don’t understand Nathaniel’s powers and accuse him of being a witch…

Author of paranormal/suspense, fantasy/adventure, m/m romance and anything else that comes to mind. Oh, and a floral designer.
View all posts by diannehartsock →
This entry was posted in blog hop, book quotes, contests and tagged bloghop, Halloween, m/mromance, Paranormal, Paranormal romance, prizes. Bookmark the permalink.