Posted on January 11, 2014 by diannehartsock 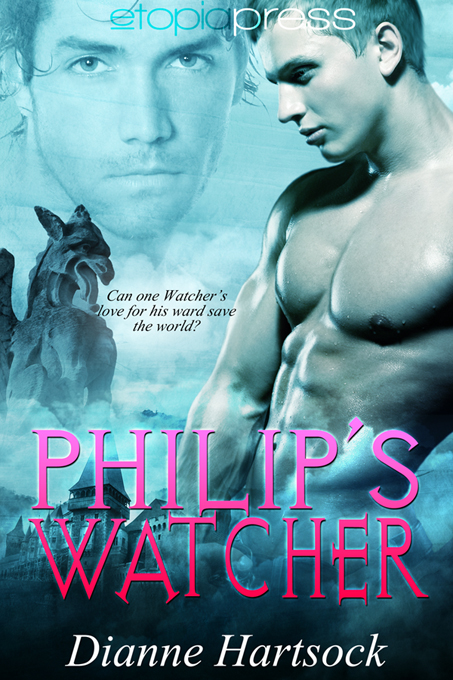 Darkness is spreading in the world with only the powerful Agenor family to oppose it. In the guise of a stone gargoyle atop the castle walls, Adrian has protected Philip, the young heir, since birth, watching him grow from childhood into a strong but lonely man without love.

When the clan chief, Philip’s father, is murdered by those he trusted, Adrian resumes his human form to better protect his beloved Philip. And finds his love returned. As lovers, their passion is all-consuming, but as they fight against treachery from within, will their love be enough to stem the dark tide sweeping the land? And will it be enough to keep Adrian’s heart alive…

Philip chewed his lip as he watched the storm clouds gather in the leaden sky. The wind picked up, cold and heavy with rain. It whipped the hair from his face and distracted him from the study of the desolate landscape spread below his feet. How he longed for spring! But winter lingered long past when it should have given way to new growth in the valley. He guessed the reason for it, and a cold finger of dread touched his heart.

An icy gust buffeted him on the exposed balcony, and Philip gathered the long strands of his hair and tied them at his neck. He bit hard on his bottom lip to stop its tremble and welcomed the pain against the ache in his heart. “He’s not coming back, is he?” he whispered as the first fat drops of moisture struck his face. He pounded a fist on the stone railing in frustration and impotent fury. “Father should have let them come to us, where we’re prepared.”

But their enemy had thrown down the gauntlet, and in his pride, Philip’s father picked it up. Jonathon Agenor had always been that way, as far back as Philip remembered. He supposed the gravity of being the Agenor Chief had made his father distant. The man kept his own council and wouldn’t listen to Philip’s cautions against a trap. The bait had been a threat against Philip’s life, something the proud man couldn’t tolerate. His life had been the forfeit. Philip closed his eyes and let the grief wash over him.

The rain swept against the walls of the stronghold, and Philip leaned his head against the stone statue on the railing beside him. “I still have you, and that’s a comfort.” He turned his gaze to the familiar face. There were many gargoyles on the high balconies of the castle, but this was his favorite. The onyx eyes glittered as if in sympathy. Distraught, Philip trailed a finger along the crack in the stonework from the creature’s forehead to its muscular chest. He flattened his hand over the cold heart and willed it to beat as he had hundreds of times before. The stone stayed firm under his palm.

“I know one of you is my Watcher,” Philip said, and he searched the stone eyes for any flicker of life. They remained fixed on some distant point, and he sighed. He rested his head on a powerful shoulder, which supported the draping wings and ran his fingers up and down the strong arm nearest him. Philip remembered arms holding him, once upon a time, soft and warm and comforting. He’d felt safe and loved in his mother’s embrace. Philip tilted his head to the creature’s ear. He’d whispered his secrets to this gargoyle all his life and saw no reason to stop now.

“I miss her,” he confessed. “Every day. I’ve been…lonely. But more than that, I could use her wisdom, now more than ever. With Father gone, my enemies will come here. What if I’m not strong enough to hold them back? They can’t be allowed to make a stronghold here.” A frown creased his forehead. “Why are we enemies, Gargoyle? Can you tell me that? Mother explained good and evil to me. Good wants to protect and cherish the earth. Evil would seize power and bend nature to its will. But which am I? I don’t know the earth. I’ve lived my life in these protected walls. Perhaps evil lives in me as well.”

Philip turned his head, hoping to catch a response to his outrageous statement. The stone remained cold, and a fey mood came over him, desperate. “You remain silent?” His gaze swept the heights of the castle. Dozens of statues stared down at him or looked out over the land his family protected. He laughed, and it sounded bitter to his ears. Rain pelted the castle and struck his face, and Philip railed against a fate he had no control over. Was he a mere puppet in this war for power? He had seen his family killed one by one. Would he be next?

In defiance, he climbed up on the balustrade and opened his arms. The storm seemed to increase in fury. Rain pounded against him, the wind seemed bent on pulling him from the wall. He shouted and shook his fist at the sky.

“If I fell, Gargoyle, would my Watcher catch me?” Rainwater poured from the spouted demons on the towers down to the valley far below. Mother had said he had a Watcher, a protector given to him at birth, but he’d never seen him. Never felt his presence. Alone, bereft, Philip wondered if he shouldn’t step off the edge…

At once a blanket of warmth engulfed him. He was cherished, guarded, needed. And beneath that he sensed love, deep and pure. “Come down.” A voiced thrummed inside him, full of fear. Philip climbed onto the balcony and stood with his back to the storm. He hung his head, ashamed of the childish, dangerous act.

“I’m sorry,” he whispered. The knowledge that his protector was near was a balm to his sore heart, and he straightened. He took a steadying breath. “Evil is moving in the world, Gargoyle. Father had gone to see the wise woman in the village to see if she knew who threatened me. Perhaps I should go see her myself, when the storm passes.”

He ran a hand over his face, cold and discouraged. He touched the gargoyle’s arm. “I’m young and naive to the ways of the world. I need guidance, and if you are my Watcher, dear friend, then it’s cruel not to tell me.” Philip sighed when he received no answer and retreated to the empty rooms within the thick walls of his home.