Posted on February 13, 2014 by diannehartsock 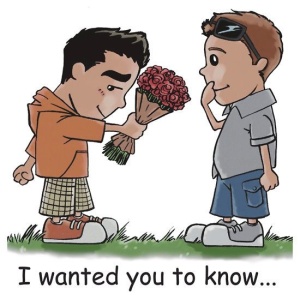 Shelton stared at the candle flame until his eyes blurred. A bead of wax, dark as blood, spilled over the taper and he caught it on his finger, welcoming the stinging burn. It distracted him from the knot of anxiety chewing his stomach. Where the hell is Nevil?

He was starting to feel embarrassed by the red table cloth and candles and little gifts in their bright paper. He glanced at the kitchen clock and groaned. Valentine’s Day was almost over without even a glimpse of his lover. He’d been so stupid. He never should try to surprise anyone. It never worked out.

The candle flickered and Shelton smiled wistfully. He’d been so excited the last few days planning this evening. He’d booked his flight early to give him enough time to get here and set up before Nevil got home from work. He’d even chickened out this morning and called Nevil to say he was coming. Nevil hadn’t picked up nor had he returned any of Shelton’s messages during the day.

He caught another drop of wax and rubbed the searing ball between his fingers. “Are you with someone else?” he whispered, voicing his deepest fear. He’d told Nevil he didn’t expect him to sleep alone during the weeks he was gone in Denver. He’d meant it, but now the sense of loss devastated him.

“Don’t be an ass,” he told his heart sternly. “He’s out with friends.”

He surged to his feet when something slammed against the front door, scaring the crap out of him. He heard Nevil’s voice cursing, and someone laughed in answer. Shit! He is with someone.

Shelton looked frantically around but had no place to go. He braced, wondering just how awkward and humiliating this was going to be. Nevil managed to get the door unlocked and he and his companion stumbled into the foyer. Shelton blinked, recognizing the man with Nevil.

He couldn’t help the grin that spread on his face. Nevil was so damned cute when he was tipsy. His black hair stood up at all angles and he giggled into his hands when he dropped the keys on the floor. Shelton had trouble tearing his gaze away to the blond giant with him.

The green eyed beauty looked confused. “Um…hi.” Michael looked from him to Nevil and back. “A lot of us were out drinking…” He shrugged. “Taxi waiting. Night.” He fled, slamming the door behind him.

Nevil stared at him in disbelief, then threw his keys and coat on the side table and strode across the room to catch Shelton to him. His first kiss was bruising, tasting of brandy and desperation, then his lips softened. Shelton moaned at the sensual slide of tongue and lips, Nevil effortlessly drawing an answering response from his eager cock.

“How are you here? Never mind. Tell me later. I’ve wanted you so much today.” Nevil devoured Shelton’s lips and it was some time before they separated. Nevil looked over Shelton’s shoulder, distracted. “You brought me gifts.”

Shelton turned to look. The table did look attractive with its candles and ribbons. He smiled shyly as he remembered the gifts he’d picked especially for his lover.

“Open the big one first,” he urged. Nevil gave him a fond look as he took it from the table and tore off the red wrappings. He looked from it to Shelton and Shelton’s heart swelled at the glimmer of moisture in the blue depths.

“It’s beautiful,” Nevil said roughly. The antique silver locket reflected the candlelight while the small ruby at its center absorbed it. Roses were engraved on the surface. Nevil opened the hinge and a tiny picture of the two of them smiled up at him.

Nevil set the locket on the table and leaned over to blow out the candles. He took Shelton’s elbow, suddenly sober. “Come with me.”

“They’re not what I want to unwrap.”

Shelton’s heart beat wildly as Nevil took him to the bedroom. Once across the threshold he put his arms around his darling’s neck, aching to taste and touch him.

He was startled when Nevil gripped his wrists. “I was lonely and hurting for you all day, then you magically appear after I’d spent hours at that stupid bar.”

“I called you. Left messages…”

Nevil frowned. “I lost my phone. Doesn’t matter. You’re here now. Do I have to tie you down to keep you here?”

Shelton blinked several times as wild images sprang to mind. Heat rose in his face and he cursed the fair skin that gave him away. Nevil gently touched his hot cheek. “I’m very glad you’re here.”

“I couldn’t keep away,” Shelton confessed and grabbed the bottom of Nevil’s shirt and slipped it over his head. Nevil kicked off his shoes as Shelton fumbled with his belt and zipper. Nevil helped Shelton undress and in moments they stood naked in the softly lit room.

Shelton’s reached for Nevil’s gorgeous cock but Nevil stopped him with a touch on his hand. “I want to go first, love.

Shelton licked his lips at the sight of the moist tip of Nevil’s erection. “But I don’t want to wait.”

In answer, Nevil put a hand on Shelton’s chest and pushed until Shelton reached the chair against the wall. He sat down and his lover nudged his knees apart and knelt between them. Nevil smiled into his eyes. “There’s something new I’ve wanted to try, but every time you get your mouth on my dick, I forget everything but the need to get in your ass as quick as I can. I’m going first.”

Shelton’s bones dissolved at Nevil’s blunt words, his body one quivering mass of need. “Do anything you like,” he whispered helplessly, and groaned in bliss when Nevil’s tongue teased the nubs on his chest and Nevil’s talented fingers got busy elsewhere.

Shelton is falling hard for his best friend and roommate, finding Nevil’s dark good looks and moments of gentleness almost impossible to resist. But Nevil is more interested in affairs of the body than the heart. As Shelton’s desire for the man grows, he wonders if he can change Nevil’s mind. But does he even want to? Nevil might not stay, once he learns Shelton’s secret, and then his loneliness would be complete.

Shelton has a gift he’s eager to give to Nevil. At a party, Nevil flirts with one man after another, keeping Shelton on his toes. Then Percy, an ex, shows up to complicate things. Despite his best efforts, Shelton can’t find the right moment to give Nevil his gift. Will Nevil ever let Shelton get close to him, or will Shelton have to keep the gift in his pocket all evening?

After a year of bliss with Nevil, Shelton is offered the promotion he’s been working toward at the bank. Unfortunately the new position is in another state, and Nevil doesn’t want to move. As tension mounts between them, Shelton is given another challenge in the form of a besotted coworker. Torn between the pressures at work and at home, Shelton has to choose his future. That is, until Nevil takes the decision out of his hands.

Shelton’s coming home, but after seven months of living apart, can he and Nevil
pick up from where they’d left off?

Shelton’s grown tired of living a  life separate from Nevil. So when Nevil is hurt in an accident at work, Shelton  comes home for good. Feeling closer than ever to his lover, Shelton’s ready to  make a lasting commitment to their relationship. But is that what Nevil wants?  Nevil is less than enthusiastic when an old flame marries, leaving Shelton
wondering if he’ll have to keep his dreams on hold indefinitely.

Can Shelton and Nevil overcome the obstacles of a blizzard, a baby, and one hot
redhead and find their way to a merry Christmas?

Shelton and Nevil have  rented a cozy cabin in the mountains in which to spend the Christmas holiday.  Tree is lit. Presents sparkle. Shelton anticipates a very merry Christmas indeed. But then a blizzard springs up, landing a sexy redhead on their doorstep  looking like trouble in a pretty package

Tommy brings a message for  Nevil, but when he first hits on Shelton in the shower, then offers to drive  Nevil to his sister’s side while she has her baby, Shelton begins to wonder just  how this mixed up Christmas is going to end.