Turn The Page is Here!

Posted on October 7, 2016 by diannehartsock 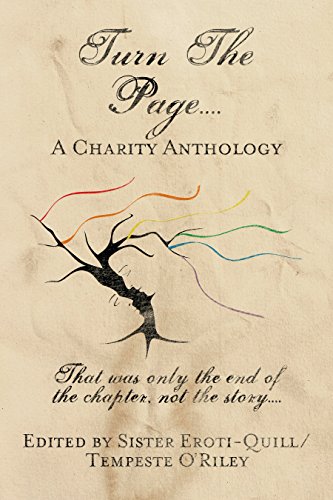 Amazon  Barnes and Noble  ARe Books

Turn The Page…. began as a simple idea and grew from there. No matter how bad things seem to be, just turn the page, there’s more—better—things to come. This is only one chapter in your life. It’s not the whole story. With this simple idea, Novice Sister Eroti-Quill—whom most know better as Tempeste O’Riley—began their quest to help Suicide Prevention and Awareness programs in their area. They managed to con (excuse me, convince) other authors to donate their time and stories to the project, and now, many months later, Turn The Page is born!

The authors in this anthology donated their talent as a way to support Eroti-Quill’s hope for others, to help bring strength to programs that so desperately need funding. It will allow them to continue to help others, and to show those that need support but may not have it, or that may be afraid to reach out, just how much love and understanding surrounds them. Turn The Page…. is a diverse range of stories about the journey of love, hope, and acceptance. 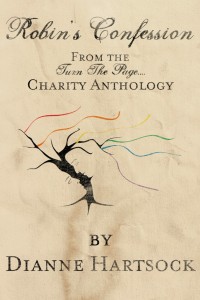 How can Robin find true love without accepting himself first?

Sweet, shy, gender fluid; Robin hides who he is, molding himself into what society views as ‘normal’, finding solace in the intricate pattern of scars he carves into his arms.

That is, until he starts dating Jase, the new man at his father’s construction company and the one who seems to want Robin for who he is, dresses and all. Jase even stands up to his own parents for Robin’s sake, risking his father’s anger and his chance to go to college. Robin is poised on the edge of happiness, ready to step into Jase’s open arms. Yet how can he believe in Jase’s love without first learning to believe in himself?

Robin leaned closer to the mirror, widening his eyes to apply liner and a touch of mascara. Careful. Jase had really torn into a girl at the club last night, reducing her to tears with his snide remarks to wash her clown face off, for God’s sake. She had overdone the eyeshadow and rouge, but really…

His hand shook and Robin took several deep breaths before coating his full lips with gloss, cherry crush. He thought it was Jase’s favorite. At least his kisses seemed more heated when he wore it.

Tossing back the dark ringlets he’d made in his hair, Robin checked their affect. Super cute. He added a few more curls to his bangs with the iron, pulling them down to brush against his eyelashes and saw the worry creasing his forehead. It’s going to be okay.

His gaze flicked to the neat rows of scars marching down the inside of his arms. The deeper gouges on each forearm had been inked into rose vines, but feathery wisps of scars still showed around them. Nevertheless, he hadn’t cut in years. Didn’t need to. He looked up. “It’s going to be all right,” he said more firmly to the image staring back at him with scared brown eyes. Robin stood and smoothed the white sleeveless sundress over his chest, flicked his thumbs over the hint of nipples. A shiver of pleasure traveled his body, making him grin.

He twirled, feeling pretty, desirable, femme. He adored the way the cool nylon caressed his skin and clung to the slight bulge of his dick. Robin’s smile slipped. What would Jase think of him, dressed like this? Doubt slithered into his dream of a happily ever after and his stomach churned with worry. It had taken months to capture Jase’s attention. He’d just had the best three weeks of his life with his insatiable boyfriend, full of laughter and crazy sex.

But what if Jase wasn’t ready to see this part of him? Fear touched his heart. What if Jase was never ready? He drew a quivering breath, not sure he could handle his rejection.

The slam of the front door made his heart race a thousand miles an hour. Oh, shit. Robin’s gaze darted frantically around the overturned bathroom. No place to hide.

Fuck! Why did he have to put on this fucking dress? Everything was ruined. Robin backed against the sink, miserable as the door swung wide.

Jase’s gaze burned over him and something flickered in his blue eyes. “What’s this shit?”

Robin’s heart clenched, anguish knotting in his throat. Making a strangled sound, he pushed passed Jase and fled their bedroom. He had to get away. He ignored Jase’s shout and darted across the living room and through the opened sliding glass door, escaping outside.

Sprinting across the lawn into the trees, he hid behind a tall maple when the tears made it impossible to see. Oh, Jesus. Oh, fuck. Jase would throw him out and he’d be alone again.

“Fucking little queer,” he muttered, just then hating who he was. Why did he have to be this way?

“Hope you’re not talking to me.”

Robin jumped at the sound of Jase’s voice and stared at the ground, breathing hard, waiting for the cruel words and laughter he deserved. Fingers brushed his cheek and he flinched, but didn’t resist when Jase tilted his chin upward, parting his lips in surprise on seeing the warmth in Jase’s eyes. Jase stepped closer to him, trapping Robin against the tree with his strong, compact body.

“Two things,” his boyfriend murmured, brushing Robin’s mouth with his own. “Never run away from me again. And…” he punctuated each word with a nip on Robin’s bottom lip. “Baby, you look fucking adorable.”

Robin collapsed back against the tree, weak with hope. “What?”

Author of paranormal/suspense, fantasy/adventure, m/m romance and anything else that comes to mind. Oh, and a floral designer.
View all posts by diannehartsock →
This entry was posted in book quotes, New Book and tagged charity anthology, GBLTQ, loveislove, m/m romance, suicide prevention. Bookmark the permalink.