Posted on October 9, 2017 by diannehartsock 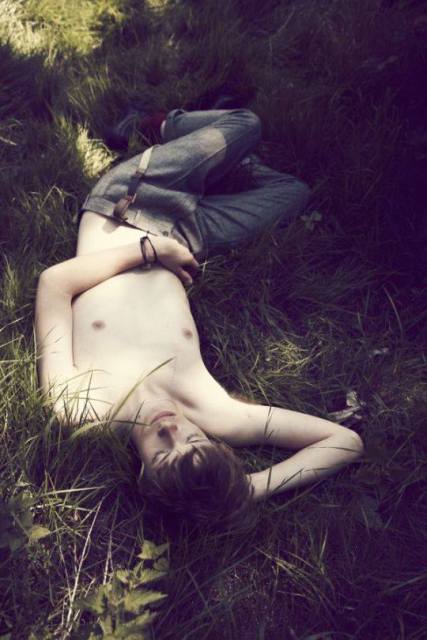 Matthew gazed at the boy asleep in the tall grass. A vision, really, all white skin, dark nipples, jeans low on his hips…

The ache in his chest surprised him. He wasn’t lonely, dammit. He’d picked the cabin for its isolation, a refuge from the merciless city life that bruised his artistic soul. He wanted to paint surrounded by beauty. But this young man was the stuff of his dreams on the longest nights.

Matthew crouched to look at the pretty face, messy hair, the dark lashes brushing a few freckles. Those parted lips begged for a kiss.

The lashes fluttered then flew open on rich brown eyes. They looked at each other, then fear flashed across his face and the boy lurched up, a blur of movement Matthew couldn’t track. What?

A small wolf, thin, half starved, stood where the boy had been seconds before. Matthew climbed to his feet.

He started for the cabin, shaking his head, incredulous. The cabin stood in a small clearing and he sat on the porch, clasped his hands between his knees. His heart lurched when the wolf slipped from the trees and cautiously approached him.

“I won’t hurt you,” Matthew promised. The wolf nuzzled the hand he held out. Matthew leaned forward and ran a soothing hand over his head, scratched behind his ears. The wolf gazed up at him, then in a blink of swift action, shifted into the gorgeous young man kneeling at his feet.

Matthew swallowed hard and stood, the guy climbing the steps to stand in front of him, a few inches shorter than himself.

“You’re not afraid,” the man noted in a husky voice that sent a pleasant shiver through him.

Matthew searched his feelings. He felt awe, disbelief, and yet a…rightness. “Do you have a name?”

“Caleb.” His smile ignited a spark in Matthew’s chest.

Matthew held out his hand. “Caleb, I don’t know how this is possible, but I feel I’ve been waiting for you my whole life.”

Caleb placed a warm hand in his. “I feel the same,” he said joyfully, and allowed Matthew to open the screen door and escort him inside the cabin.

Author of paranormal/suspense, fantasy/adventure, m/m romance and anything else that comes to mind. Oh, and a floral designer.
View all posts by diannehartsock →
This entry was posted in flash fiction, Monday Flash Fiction, ramblings, Uncategorized and tagged flashfiction, m/mromance, Romance, shifter. Bookmark the permalink.