Posted on January 11, 2020 by diannehartsock 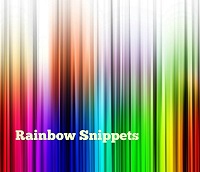 Welcome to Rainbow Snippets! Enjoy snippets from a cool group of writers and bloggers. You might find historical fiction, YA, something sweet or something spicy, but the common thread is that all main characters will identify as LGBTQIA+

I have a cover! And today, Quinn would just rather go home…

Quinn glanced behind them at the lonely driveway. He shivered when he saw the shadows creeping from under the trees. Shrubs overran the flowerbeds and weeds grew between the closely fitted flagstones of the walkway. He couldn’t understand why Liam always had to choose the scariest places to haunt.

“It’ll be darker inside,” he hinted to the apparition.

A reluctant ghost at best, Quinn doesn’t like the haunts to which Liam takes him, always fearful of encountering a true medium in the paranormal groups investigating the houses, bent on seeing a ghost.

When Liam sets him up for such a meeting, Quinn breaks from him, not fully understanding the apparition’s cruelty. He’d thought they were friends. But despite his anger, when he believes Liam will go to the manor house without him, a house known to be haunted by a fearsome ghost, Quinn joins him, hoping to keep him from danger.

But it is Quinn himself who is in danger, not only from Betterford’s ghost, the mediums stalking him, but also from a secret Liam’s been keeping, making Quinn wonder if he’ll survive the longest haunt of his life.

16 Responses to Trials of a Lonely Specter #rainbowsnippets #lgbtqia+ #ghoststory