“Stop staring at me!”

Lance chuckled and lowered his lashes, a shutter closing on a blue summer sky. I hated that I missed his gaze already. The full lips parted and I shivered as his sweet breath brushed over my face.

Blue eyes flashed open and I stumbled back when Lance reached out and played with the buttons of my shirt. I held my anger close. “I know you were with him.” Lance shrugged and the crack in my heart widened. “Yeah, fuck you!”

Lance smiled and continued to undress me as if my outburst amused him. “Bengi, honey, that’s the plan.”

What? My brain stopped working as the bedroom door opened and Greg sauntered out to join us. Strong, compact body. His eyes captivated me, a dark passionate midnight. My cock stirred and hardened as his gaze devoured my bared chest. I imagined his teeth grazing the tiny nubs growing tight. He bit the ring in his lower lip, melting my bones. “He’s so pretty.”

“Adorable,” Lance agreed and undid the last button on my jeans and tugged them down.

I whimpered, trembling as the two beautiful men, eyes the color of day and night, put their mouths on me.

“Hush, baby. Come here.” Nathan opened his arms, relieved when Chris walked into his embrace without hesitation. Shit! His darling trembled like a leaf. He ran a soothing hand over Chris’ back and kneaded his tense shoulders.

Chris choked on a sob and Nathan winced at his painful words. “He didn’t even say goodbye. Just packed his things and left. Just like that, as if I meant nothing…”

“Deep breaths. It’s going to be okay.” Nathan tightened his hold and brushed a kiss over Chris’ damp cheek. He licked away a few tears. He’d known Chris would run to him when Tad broke off their affair. But he hadn’t expected Chris to be so devestated by it. Fuck, he’d have to take things slowly when all he wanted was Chris in his bed.

Nathan stared into the distance, hoping to hell Chris never found out he’d paid off his bastard boyfriend to disappear.

Caleb scowled at his image reflected in the window. “Asshole.” His heart jumped at the knock on the door. He couldn’t believe Michael still wanted to see him after catching him kissing that twink in the dress last night.

The practiced apology died on his lips. His lover’s six foot gorgeousness was clad in nothing but a camisole and the shortest pink mini Caleb had ever seen.

Caleb blinked and pulled him inside. “What if the neighbors see you?”

“I thought you liked your men to dress this way? Am I wrong?”

Caleb bit his lip, distracted by taut nipples straining against black mesh. A pink tipped fingernail tilted his face and he met Michael’s eyes, fond and knowing. “We learned something new about Caleb last night. But if you kiss another man again I’ll cut off your balls.”

Caleb stretched and brought their lips together in a promise, swallowing Michael’s sigh as he slid eager hands under the lethal skirt.

Tad ached to be touched. This is ridiculous!

“Nice, darling. Now turn around. Show me that pretty ass.”

Tad stared at the wall, trying to ignore his twitching cock at the intoxicating whir of the camera. He hadn’t known he’d respond to it like this. “Hurry. Rob’ll be home any…”

Shit! A key rattled in the front door. Tad dove for his clothes. His head popped through the collar of his shirt as the door opened. Dammit! He should have put his boxers on first.

Rob came into the room, and stopped. His glance went from Steve to Tad’s half naked self. “What’s going on?”

Steve raised his hands. “I was only taking pictures. No sampling. Promise.”

Tad’s heart thumped. “It was supposed to be a surprise. I wanted to send a picture each night you’re gone on that business trip.”

“What? Oh, off. Definitely off.” Tad yanked the shirt over his head. His blood surged at the click of the camera as Rob pinned him to the wall. 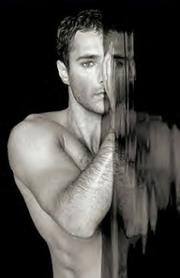 Samuel strangled on his tears, teeth clenched so tight his jaw ached. He shook with anger and aguish. A pool opened, a deep well in his mind filled with despair and the image of Billy’s body, broken and dying in his arms on the side of the road, abandoned by the hit and run driver. The darkness spread around him, seductive, luring. It would be so easy… Peace in the razor waiting on the bathroom sink.

The memory caressed Samuel’s lips, brushed kisses over his cheeks. Laughter and passion tangled in the sheets. Billy’s blue eyes filled with love as they planned their future, giggling and groping and fucking.

Samuel straightened, sucking in air. He made his choice. “I’ll live for both of us. I swear to God, Billy, I’ll make you proud of me.”

He reached for the door handle, solid in his grasp, and flung the front door open. Raising his chin for courage, he stepped into the sunlight. 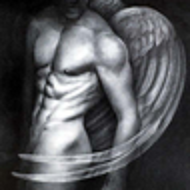 David almost swooned as he pushed deeper into the intoxicating heat of Saul’s body. Saul stirred in his arms, moaning with pleasure.

Sleep. David soothed the damp brow of his lover, drawing him back into the dream where they lay safe together. Icy rain fell in the shallow trench and David spread his wings over the soldier spooned tight against him.

David loved Saul with hard, quick thrusts, keeping his senses swamped in the pleasures of the moment, away from the rumble of approaching terror. A scream tore the night. The glimmer of angels and darker shapes, demons come to torment the damned, filled the trenches with them.

“Come for me, darling,” David murmured in Saul’s ear as he had so many nights in this lonely soldier’s life.

“Come, now!” he urged as a boom shook the air. Saul cried out and came in a shuddering rush even as a wall of flame ran the length of the trench. David’s own orgasm caught him in a wave of joy as he joined their souls in a crash of ecstasy and thunder. David spirited Saul into the heavens, far from the terrors of war, toward the delights of his next existence.

David dashed the tears and blood from his eyes. Oh God.

He dropped to his knees beside Saul’s slashed body. Icy rain formed crimson puddles in the mud. Without thought he placed his hands over Saul’s faint heartbeat. Life gathered in his palms and spread to the demon.

A gasp escaped the bloody lips and Saul grabbed his wrists. “Enough! I don’t need all…”

Hounds bayed in the distance and David’s gaze swept the battlefield littered with the bodies of both angels and demons. Saul’s grip tightened. “Go, Angel! They’ll tear you to shreds.”

Saul pulled him down. They kissed, their souls twined in a wild dance. David groaned, wanting Saul writhing in his arms, screaming his name as he came.

Saul shoved at his chest as the hell hounds drew near. David nipped the demon’s full lips. “I’ll find you,” he vowed. “I’ll find a way for us to be together.”

He ran and his wings spread in a shower of gold as he leapt into the sky. Drawing his bright sword, he joined the battle further afield, though he burned for the demon who’d stolen his heart.

Tracey bit hard on his lip against a stab of jealousy. It was his own fault. He shouldn’t have shoved Ken away last night. But he couldn’t believe any man of his would want to wear a dress. Now here was Ken looking amazing in a sheer purple chami and mini that hugged his delicious ass to perfection.

He saw others staring hungrily and clenched his hands, tattoos on his arms bunching. He edged closer to the bar. Sure, he’d given up the right to say anything, but if that fucker touched Ken one more time he’d be picking up teeth.

Ken must have heard his growl and glanced over his shoulder. Pretty blue eyes widened, then a dark blush stained his cheeks and he swiveled forward. Lacey went up behind his stool and whispered, “You’re so beautiful and I’m an ass.”

“Thought you were embarrassed by me.”

“You surprised me and I’m never good with that. Forgive me?”

“Hell no! I want everyone to see me with the most gorgeous man I’ve ever met.”

Ken stood up, smiles wreathing his face. Tracey promptly took his place and pulled Ken onto his knee. 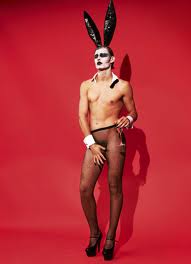 Steve gaped as sex on two legs sauntered into the room. He pushed his chair back from the desk and rose, unable to keep the wide grin off his face. “What the fuck are you supposed to be?”

“Like it?” Gabe turned and wiggled a ridiculous puff of a tail on his delectable ass.

Unable to resist, Steve grabbed the globes of tempting flesh. Gabe pressed back into his hands and Steve leaned against Gabe’s strong body. He licked Gabe’s neck, careful of make up. “My father already hates you. How is this supposed to help?”

“He insists we wear costumes to that absurd party.”

“Please tell me there’s more to it than this?”

“Oh sure. Check and see if the tights are straight, love.”

Steve shifted and captured the wicked slash of Gabe’s mouth, sliding his tongue into the sultry heat. Gabe’s moan set him on fire. He slid his hands down the sculpted chest to the prize held tight in silk nylons.

They lingered, then Gabe pulled back, showing the vulnerability Steve fell in love with. “Should I change?”

Steve crushed the precious man in his arms. “Don’t you fucking dare. In fact, I’ll find something that matches.”